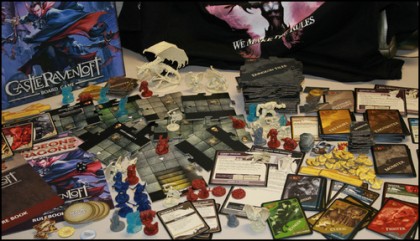 Expedition to Castle Ravenloft. Results 1 to 9 of 9.

Expedition to Castle Ravenloft In the late days of 3e Wizards put out four of these expedition modules and this one always seemed to be held as the best of the bunch. With less then two months till Halloween I’m going to start and run it as a mini arc in my campaign. The players will not be aware at first that we are going through this. The names of the town and NPCs will be changed to disguise it. Ravenloft is well known and will automatically put the players in a certain state of mind that I want to avoid initially.

What do people think of the module? What worked for you and what didn’t? What did you change or would change to make it better? To be blunt, IMO, it was the only one of the Expedition adventures that wasn’t complete and utter crap.

I haven’t run it, per se, but stole the basic idea and the “three shrines” concept for another campaign. I really liked that. I 3.55 that was the only Expedition adventure worth the time.

I love the original adventure, and the Expedition did an excellent job of maintaining the core story while expanding the options for actually defeating Strahd. I don’t think you will be able to disguise the story for very long, but if you work the shrines as mini-side treks instead of being part of targeting Strahd you could play up the ‘stay the winter here and get to be part of the town’, and even have the local noble help them out and be kind and generous I would also play up a lycanthrope vibe in order to keep them off the vampiric scent as long as possible.

I would also play up a lycanthrope vibe in order to keep them off the vampiric scent as long as possible. We got through the first section. The PCs had a hard time with the zombies but the other creatures were pretty easy.

The dice were hot for the Zombies so they did a lot of damage. Now that they are there and they made friends with the Paladin they are trying to figure out what is going on. Anyone do anything neat with the different groups or what worked and what didn’t with different encounters?

The big change I have is that the Vampire is a little more like from the movie coming out Vampire Untold. He didn’t become a Vampire for the power or prestige he did it to protect the people and town he loves. So, there is a powerful dragon that is becoming active and castle Ravenloft is not that far away. So, he became a Vampire in hopes of being able to deal with the Dragon.

I’m hoping that little twist will make it tougher for the Pcs to just go after him and kill him. The PCs know of the Dragon and want him dead too. Join Date Mar Posts 5, I really like the multiple shrines concept although the actual shrine bonuses were sort of “meh”.

The different factions are good Strahd, were-wolves, vistani, hags, etc. General Ravenloft setting, etc. Probably too many undead in too small of a space Do they run out of prey? Join Date Nov Posts At least in 3. This is often missed by writers, or is subject to different setting rules. Originally Posted by Crothian. On one hand, it gave me a great campaign. On the other, I needed to invest quite a bit of work to get it there. One look at the two page stat block not write up – stat block was it – I officially switch to Savage Worlds and never looked back.

I heavily Eberronized it as that was my world of choice at the time. Here is cwstle link to what I did https: In the end, I played hard on the Insanity side and they PCs really had to free Strahd from his madness.

I really changed my view on big climatic endings – the PCs had to deal with the madness in very non-conventional ways. Overall, there is some very good stuff.

But if you are not going to run it in 3. My final tip is do some research on horror and story telling. Your goal is to impact the players, not just the PCs. Errors The following errors occurred with your submission. Posting Quick Reply – Please Wait.